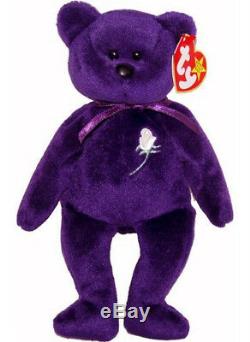 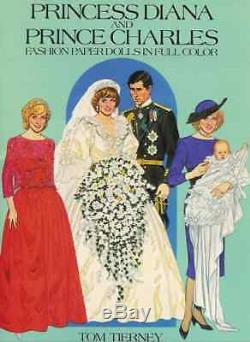 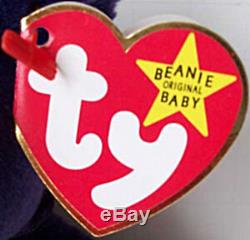 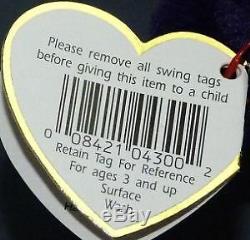 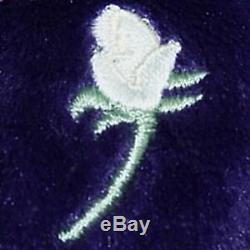 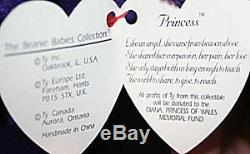 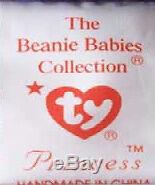 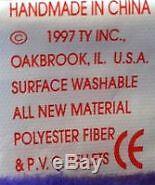 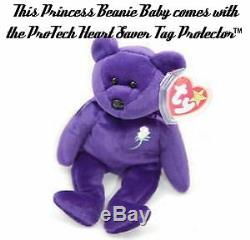 IMPORTANT: PVC pellets were the first pellets! They were replaced with PE pellets. Therefore the PVC Tush Tags were created first & were the first Princess Beanie Babies made. Sellers with PE tush tags are incorrect.

Please read the Princess Beanie History below for all the correct information on every detail including photo proof. Made In China indicated on the Swing Tag. Size 9 Top of the ears to bottom of the feet. Retired December 1997 That's Correct..

Extremely Limited Edition This is the very first Princess Beanie Edition. Minty Mint Condition For Top Dollar Investment. All #1 First Editions should always have the above details. PLEASE READ THE PRINCESS BEANIE HISTORY BELOW..

MESSAGE INSIDE SWING TAG Like an angel, she came from heaven above She shared her compassion, her pain, her love She only stayed with us long enough to teach The world to share, to give, to reach. CONDITION MWMT Minty Mint With Minty Mint Tags!!!

This Beanie Baby comes with a tag protector on the Swing Tag. PLEASE SCROLL DOWN FOR MORE PICs.

BEWARE OF THE TUSH TAGS WITH STAMPED NUMBERS. Princess Diana Beanie Baby Bears with a number inside the Tush Tags are the worthless mass produced bears that exceed 40 million made! PLEASE DO NOT BE FOOLED BY GREEDY SELLERS giving false information about these bears.

The stamped numbers inside these tush tags represent Factory Control Numbers or Assembly Line Numbers & NOTHING ELSE. THERE WAS NEVER A FIRST EDITION BEANIE EVER MADE WITH A STAMPED NUMBER THAT MEANT IT WAS A NUMBERED EDITION BEANIE!! AND the stamped worthless Princess Diana Beanie Baby Bear will also have the Heart/Swing tag with the very noticeable double split in the paragraph above Diana, Princess Of Wales Memorial Fund, like the 5th Edition PD Beanie Bear. DENOTING THIS IS THE DREADED 6TH EDITION BEAR WITH A STAMPED FACTORY ASSEMBLY LINE NUMBER!! NUMBERS DENOTING MASS PRODUCED PD BEANIE BABIES.

PRINCESS DIANA BEANIE BEARS SHOULD BE AUCTIONED FOR CHARITY PAY IT FORWARD A GIVING HEART IS A PURE HEART.. Princess Diana's philanthropic endeavors greatly endeared Diana to the hearts of the world & live on as her legacy. The Diana Princess of Wales Memorial Fund was established in her honor.

She was the People's Princess. Her life began in a fairytale fashion; yet, she rose to demonstrate to the world that one can overcome adversity & leave a meaningful legacy. She restored a sense of mission & humanity to the monarchy of England as well as the world. Ty Beanie Baby'Princess' the bear was announced on October 1997 & issued in December 1997 as a charity release for the Princess Diana of Wales Memorial Fund. All of Ty Inc's profits from the bear were donated to the fund. The Princess Beanie Baby was retired on April 13, 1999. PVC PELLETS VS PE PELLETS. The pellet issue helps to define which came first. Stands for Polyvinylchloride & P. Ty stopped using PVC pellets in favor of using PE pellets as these were considered to be more environmentally friendly. Beanies with PVC pellets tend to be more rare & therefore more valuable.

PVC WAS INVENTED FIRST DUH! The information is vital to the truth about the extreme rarity of the real #1 PVC's. There would never be PE Beanies of any kind if Ty wasn't forced by Green Peace to change over from PVC to PE!!!

The only thing that matter's is what is on the Tush Tag, not some bogus CIA/FBI test to see what the Beanies are filled with. BRIGHT GREEN STEM VS PALE GREEN STEM. The bright green stems are on the first two editions. The pale green stems are on the later editions of the Princess Beanie Babies. SIX EDITIONS WERE RELEASED IN THIS ORDER The Edition PICs are a Historical Timeline Reference..

The PVC Tush Tag came first & the PE Tush Tag came second. The Beanie Vendors received both PVC & PE bears for sale at the same time in January 1998. Ty knew that the PVC Princess Beanie Bear was so rare that they only allowed one PVC Bear 1st Edition to be included with eleven PE Bear 2nd Editions for each Beanie Vendor to sell. That's why there are so many PE Bears for sale & only a handful of PVC Bears for investment.

The Fifth Edition was the issue that started the mass production. These 5th Editions do not have the dreaded stamped numbers which denote assembly line or factory control numbers.

Only the Princess Beanie Bear Buddy has the official Diana charity emblem or logo on the inside of the Swing Tag, all the Princess Beanie Baby Swing Tags do not. The Royal Wedding of The Century Queen Elizabeth has bestowed the official royal titles onto Prince William & Kate making them the Duke & Duchess of Cambridge. Abundant Blessings To Them & May They Live Happily Ever After...

Cost is calculated according to the destination Country. Customers can choose the service that they wish based on the desire for speed & security vs. Each country establishes its own standards. Many factors can affect international transit times.

We have no control over these charges & cannot predict what they may be. Holidays: Every country celebrates different holidays. Note that weekends may differ by country as well. Earthquakes, hurricanes, volcanic ash etc...

Media is slower then Priority etc... We promise not to fold or roll your collectible just because it could fit into an unprotected envelope or mailing tube. We won't send your item unprotected. It is very important to us that our buyers receive all items undamaged. There are many sellers that cause the damage themselves either directly or indirectly.

You know who you are! A few sellers have stated to us that they cross their fingers & hope their items arrive OK. Can you imagine a shipper actually spending extra time reading what is on the box or envelope other than the address? So rest assured, we would rather overprotect because we know what can happen.

We use thick cardboard to protect flat paper items from damage. If it is a larger item we use bubble wrap. Once an item is properly protected, we pack using custom sized mailers or envelopes for flat paper items & properly sized boxes with plenty of peanuts for larger items. SMOKE FREE ENVIRONMENT: All items have been stored in a nonsmoking, smoke free environment.

CONDITION: Grading conditions are subjective. You must be your own judge when deciding the condition of items vintage or new.

ABOUT US: We are the owner's of COOL COLLECTIBLES Celebrating decades in business & marriage. Please check out our Celebrity Items, Memorabilia & Collectibles offered.

The seller is "thejackpot" and is located in Los Angeles. This item can be shipped worldwide.