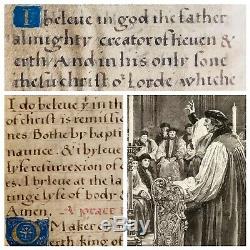 THE MAGNA CARTA OF THE ENGLISH REFORMATION. An illuminated manuscript on vellum containing the earliest distinctive English version of the Apostles Creed.

This extraordinary manuscript, apparently unique and a fine example of early English prose, contains Dr. John Colet's Dean of St. Paul's Cathedral English translation and amendments to the Apostles Creed, defining the church as the clean congregation of faithful people in grace and community of saints only in Christ Jesus. With its clear call to reform, these words served to lay a foundation for the Reformation in England.

Accepted by Henry VIII, this document has been termed "the Magna Carta of the English Reformation" and "the raison d'être" of the Church of England. In 1496, John Colet, an Oxford professor and the son of the Mayor of London, started reading the New Testament in Greek and translating it into English for his students at Oxford, and later for the public at Saint Paul s Cathedral in London.

Due to the large numbers of those desiring to hear the scriptures in English, within six months the congregation had built to almost 20,000. While translating the scriptures into English remained illegal, Colet avoided prosecution due to his personal standing and connections with the crown. His desire to reform the church led to his authorship of this distinctive English version of the Apostles Creed, as well as his illegal English translations of the "Pater Noster" and the "Ave Maria" (also included in this manuscript). This tremendously important work contains one of the very earliest pre-Tyndale translations of any part of the Bible into Early Modern English. Specializes in early printed English Bibles, books, manuscripts, and objet dart.

Are merely representative of our broader inventory. Please do not hesitate to enquire regarding other early printed books and manuscripts.

In addition, we are currently offering one of the world's most significant collections of biblical manuscripts and early printed Bibles. The Legacy Collection may be viewed at: CrawfordSterling. The item "1505 Pre Coverdale TYNDALE English BIBLE Reformation MANUSCRIPT Vellum RARE" is in sale since Thursday, April 25, 2019.

This item is in the category "Books\Antiquarian & Collectible". The seller is "collector1611" and is located in Munford, Alabama. This item can be shipped to United States.