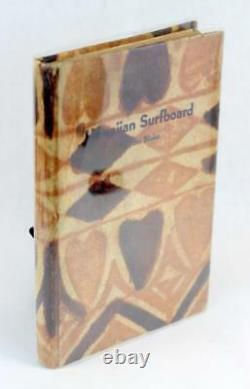 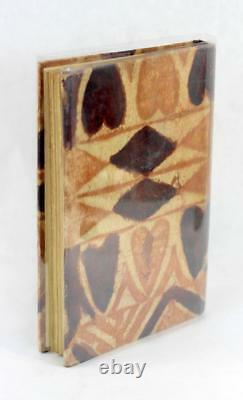 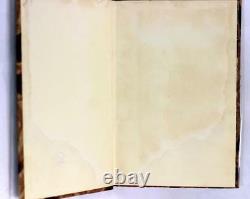 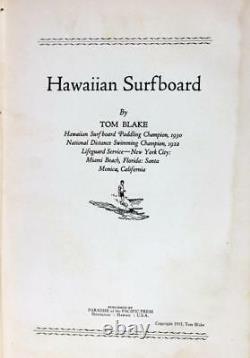 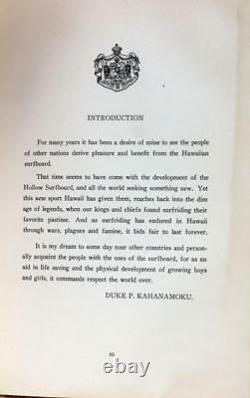 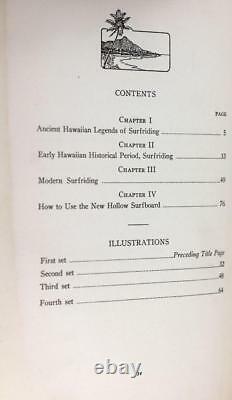 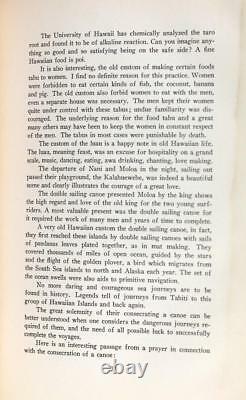 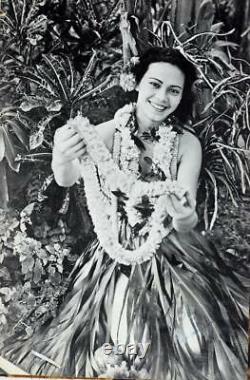 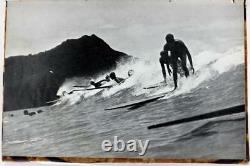 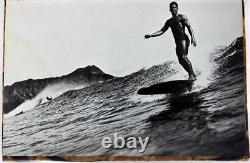 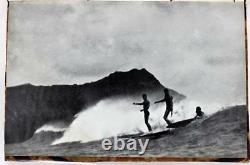 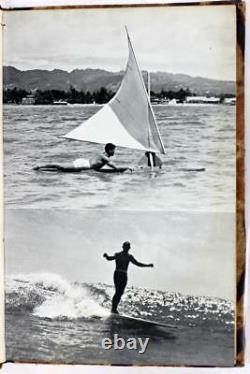 Paradise of the Pacific Press. Iv, 5- 95; 32 photographic plates plus other illustrations in text. Bound in original tapa-cloth, issue without surfers on upper covers (no priority). Signed by Pulani, Hula dancer of Lalani Hawaian Village on her photo (very faint). Text block has a bit of dampstain present along the fore-edge (see photos). Text is clean and free of marks, binding tight and solid, boards lightly rubbed and worn.

He first book devoted exclusively to surfind and the the most important publication in the surfing canon. " De la Vega, "200 years of surfing Literature It contains 95 pages that describe surfing and surfboard designs and innovations in the 1920s and early 30s. The photographs were taken by Blake himself. Thomas Edward "Tom" Blake (March 8, 1902- May 5, 1994) was an American athlete, inventor, and writer, widely considered to be one of the most influential surfers in history, and a key figure in transforming surfing from a regional Hawaiian specialty to a nationally popular sport.

Assessing Blake's significance, the sociologist Kristin Lawler wrote: Tom Blake is a legendary figure; he's considered the founder of California surf culture. He personally innovated most of what's associated with surfers to this day: he was the first to experiment with making better surfboards, revolutionizing board design in the process with lightweight materials and the fin; he was the first to build a waterproof camera housing and inaugurated the tradition of surfers documenting themselves and their friends; and he was the first among countless surfers to come to write a book on the history and pleasures of surfing.

In addition, his personal style became the prototypical beachcomber look, still in effect today. 1st Edition 1st Book on Surfing 1935 Hawaiian Surfboard Tom Blake Signed Pulani. Up For Sale Today is. Tom Blake Introduction by Duke Kahanamoku. Blake first attempted to ride a wave in 1921 on an old board he found while working at the Santa Monica Swim Club.

According to his account, he wiped out badly and waited several years to try again. Upon arrival, Blake attempted to seek out Kahanamoku, only to find that he was not on the island. However, he quickly became friends with Duke's five brothers, all skilled surfers in their own right, and became immersed in the study of surfing and Hawaiian culture.

Over the next decade, Blake rose to eminence in a sport that had until then been largely the province of native Hawaiians. Back on the mainland, in September 1927, Blake and his friend Sam Reid became the first to surf Malibu Point, and in 1928, he organized, and then won, the first Pacific Coast Surfriding Championship. In 1930, he entered the Hawaiian Surfboard Paddling Championships using a lightweight board of his own design. He overwhelmed all opposition, setting eight new records in the course of the match. However, his victory sparked some resentment among his native Hawaiian friends, feeling that the new board had given him unfair advantage, and Blake stopped entering races after this.

Nonetheless, he continued to compile an extraordinary record of athletic feats. In 1932, Blake, with two friends, made the first successful attempt at paddling the 26 miles from the mainland to Catalina Island.

Then on August 1, 1936, he set a milestone that still stands: entering the waves at Kalehuawehe near Waikiki, he made a run estimated at 4,500 feet, the longest recorded surf ride in history. These included a variety of styles, from the shorter alaia to the heavy, 16-foot long olo boards traditionally reserved for royalty. On his 1926 visit, he was able to secure permission from the curators to study the boards' construction and restore several of them. He then began his own experiments in improving surfboard design. Up until that point, most modern surfers, even Duke Kahanamoku, used the shorter alaia boards due to the immense weight up to 200 pounds of the solid olo boards.

Blake initially sought to build lighter olos by drilling hundreds of holes in the board, then covering the openings with a thin outer layer. This was the style of board he used to win the 1928 Pacific Coast Championship. Then after three years of experimenting, in 1929, Blake constructed a hollow board with transverse bracing.

In 1931, he received a patent for his hollow surfboard design and opened the sport up to hundreds of people who weren't able to muscle the heavy plank boards down the beach and into the water. " One historian remarked: "Blake changed the whole scene by working on these boards. He single-handedly, without really giving it much thought, changed surfing in a massive, huge way. It was because of this we are doing what we do on boards. " Blakes internally braced hollow wooden surfboards were eventually superseded by laminated boards with an interior layer of balsa, then by foam-and-fiberglass designs, but another of his innovations remains a fixture of modern surf- and paddleboards, the "skeg or fin.

Traditional surfboards were flat-bottomed, but in 1935, Blake experimented by tearing the keel off an old speedboat and attaching it to the bottom of a surfboard. Blake later remembered, I finally put the fin on the board and went out in the surf, paddled out. In paddling out, the board had an entirely different feeling with the skeg on it, it wasn't entirely a likable feeling...

But I got a pretty good wave and right away found the remarkable control you had over the board with the skeg on it. It didn't spin out, it steered easy, because the tail held steady when you put the pressure on the front. You could turn it any way you wanted it. I knew right from that moment it was a success.

I consider it as my good solid contribution to the sport. It gives me a lot of pleasure when I see the kids drive by in their cars with a fin on their board.

According to at least one source, the San Diego surfer Woody Brown independently came up with the idea for the skeg shortly afterward, but Brown himself gave Blake precedence: (I made my first surfboard keel) about'36 or'37, somewhere in there; about the same time. But, I didn't know anything about (Blake) and his experiments with adding fins to surfboards. See, we were all separated out. I was in San Diego and he was in L. Tom Blake is widely described as one of the most significant figures in the history of surfing: for his athletic achievements, for his innovations in board design, for his success in popularizing the sport, and for his role in pioneering what came to be known as the surfing life. In 2001, surf journalist Drew Kampion wrote, Blake altered everything. He almost single-handedly transformed surfing from a primitive Polynesian curiosity into a 20th-century lifestyle. " Blakes biographer Gary Lynch described his significance this way: "Tom Blake is the obvious link between the ancient South Pacific waterman and the twentieth century Anglo waterman. Blake placed surfboards, paddleboards, and life saving equipment within reach of the interested athlete, lifeguard, and seaside visitor. In Blake's life, there was no separation between religion, surfing, swimming, building surfboards, eating, and exercise. At the time, no one guessed that his unorthodox life style would one day become the accepted standard for the beach culture.

In 1991, writing in Surfer magazine, Sam George summed up Blakes accomplishments: To put it simply, because Tom Blake was, we are. The extraordinary contributions of this one man to the lifestyle we call surfing are almost impossible to gauge.

They're too broad, too all-encompassing. Thomas Edward Blake's initials are at the root of so many innovations and influences as almost to be taken for granted. A dozen or so men might have eventually done everything Blake did singularly. Even a partial list of his accomplishments is overwhelming.

His greatest contribution was a life - our life. Tom Blake didn't just surf, but made a life of surfing. And while the great Duke nobly represented a spiritual tie to his ancient Hawaiian sport, it was Blake who provided the modern mode for all who came after. And now here we are at the end of the century - a century of surfing he shaped more than anyone - we still look like him, we still dress like him, we still surf like him. OUR MISSION STATEMENT: Our goal is to provide the best books for the lowest prices.

Thank you for visiting this listing and we hope to see you again soon! Book formats and corresponding sizes. Approximate cover size (width × height). ALL ITEMS ARE DESCRIBED TO THE BEST OF MY ABILITY! ALL ITEMS ARE PACKED IN A WATERPROOF CUSTOM FITTED BAG, WRAPPED IN 2 LAYERS OF BUBBLE WRAP AND THEN PLACED INTO A CUSTOM FITTED CARDBOARD MAILER. IF YOU DO WIN MULTIPLE ITEMS PLEASE DO NOT PAY FOR THEM INDIVIDUALLY!

Get images that make Supersized seem small. Showcase your items with Auctiva's. The item "1st Edition 1st Book on Surfing 1935 Hawaiian Surfboard Tom Blake Signed Pulani" is in sale since Saturday, September 1, 2018. This item is in the category "Books & Magazines\Antiquarian & Collectible". The seller is "lastexitbooks" and is located in Charlottesville, Virginia.