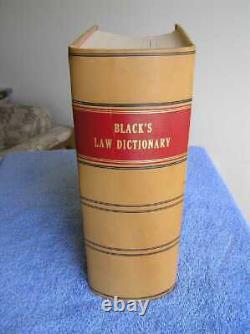 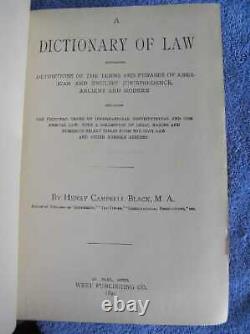 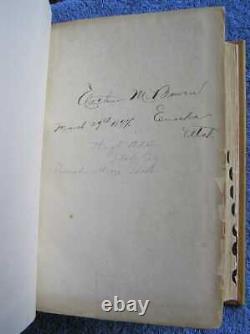 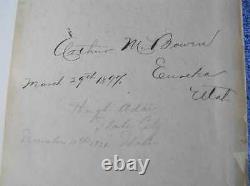 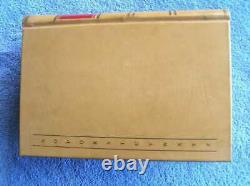 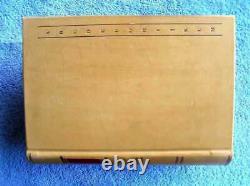 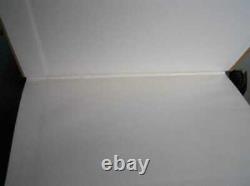 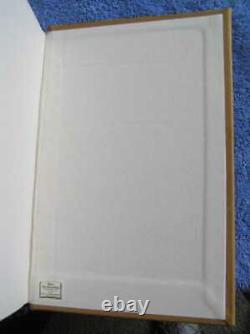 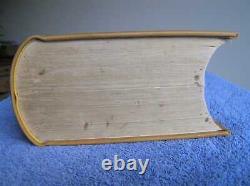 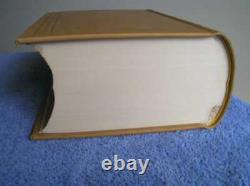 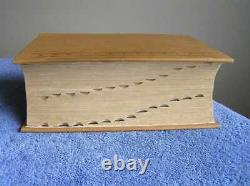 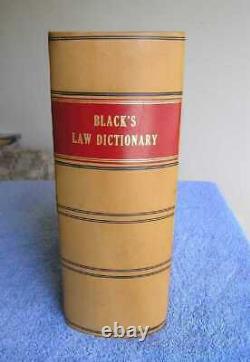 Typically, they run about 3 thick, depending on the paper stock used when printing it. This one happens to run 4 thick and is definitely notable when sitting next to a normal size copy! The extra broad spine and light tan leather, combined with the red name label and black pinstriping really set it off and present it as a showpiece copy.

If you're looking for a presentation piece for your collection, or a solid working copy, this most certainly makes a statement! While rebound in full leather and modernized with a brand new binding, I wanted to keep this as much in its original state as I could, since part of the enjoyment of such a book is in appreciating its 129 year history. I flipped through each and every page of this book and noted anything I could find. Obviously, most of these points are being very miniscule and very few sellers note such things.

This is an exceptionally solid copy, condition is Very Good at a minimum. The final photo shows four copies of the First Edition I have available. This listing is for ONLY the copy on the far left.

If youd like more, or higher resolution photos, contact me and I will send them to you. For those who want an extremely detailed description. Rebound in natural full grain leather. As with any natural substance, each piece of leather has its own "character" and variations in coloring and texture.

The front cover shows one scuff-like imperfection to the leather approximately 1/32 of an inch by 1/4 inch which shows up in the photos as kind of a smudge at the level of the letter K stamped on the spine. The spine has one very small similar mark maybe 1/32 of an inch by 1/16 of an inch near the top of the spine, just below the top headband. The rear cover shows very miniscule color variations on the level of the O, the Q and the T letters.

They are small and light, so look sharp! (I do have higher resolution photos if you prefer to get greater detail on any area). The spine label is slightly wrinkled in two spots; apparently they had problems with their glue not setting properly and it shifted. Prior to being rebound, the tops of the pages were trimmed to remove any writing on the outer edges and give a more uniform surface area. In doing so the page tops have a brighter white color than the bottom of the page edges which were left in their original state and are thus a bit darker toned. On the top of the pages, the inner corner next to the binding has a small area where the trimming machine had difficulty with the thickness of the book (see photo).

New end papers were added, with the signature page left alone for historical context. This copy shows two signatures of prior owners, an Arthur M. Bowen of Eureka, Utah March 29, 1897 (See very bottom for bio on him) and Hugh Adair of Idaho City, Idaho December 11 1931.

The outer edges on this page, and to a much lesser degree, the next page, are lightly chipped. Both pages also have small page tears which have been fixed by clear tape. A few other pages have light chipping to the page edges, roughly 1/32nd wide. This pretty much disappears by the end of the Preface on page X and is seen again until the very last two pages of the book, where again it is maybe 1/32 of an inch wide at the very edges of the page.

Page IX of the preface has two small holes affecting one definition on pages IX and X of the "Bibliographical List of Principal Law Dictionaries". No legal definitions are affected, this is simply preface material showing other legal dictionaries of the time. Page 11 has a 1/16 tear at the top margin; no definitions are affected. Page 43-44 has a very small crinkle/tear that lightly affects two definitions. Both are fully readable and you'd likely never notice the problem if I hadn't mentioned it! Page 151 and 153 there is a 1/8 tear to the bottom page margin. No text is affected, its not even close. Page 577-599 there is a very, very light waterstain in the lower margin roughly 1/8" by 1/8" long. No text is affected as its in the very outer corner of the page. Pages 1189 to 1199 there is an indentation into the bottom of the pages such as if someone had poked the book with a pencil point. It ranges from about 1mm to 1/16 in depth throughout those pages. No text is affected, its the extreme lower edge of the page below the text block. On pages 1251 and 1253, the bottom edge of the page is torn roughly 1/32nd by 1/4 in length. Its the lower left part of the page, somewhat near the binding. No text is affected, its all in the margin.

Overall condition, combining both the new and original elements is Very Good to Very Good plus. This is a practical age and today, more than ever before, whatever their vocation or calling, men are measured by what they accomplish.

"Efficiency" is indeed the slogan of the hour and life a constant measure of strength, a contest where ability, force and character are the determining factors. Bowen, of Twin Falls, a young and native westerner, came to Idaho in 1904 and in less than a decade has become one of the leading men of the state, both in his profession of law and as a factor in the public life of the commonwealth. He was born in Mono county, California. April 26, 1876, and when a small boy accompanied his parents to Nevada, where he lived until about eighteen years of age and acquired his education.

After leaving school he worked for a time in the mines of Nevada and Utah and later taught school in the latter state. In the meantime he had begun to prepare for law and so assiduously and intelligently directed his energies to that accomplishment that at the age of twenty-three he had qualified for the profession and was formally admitted to the bar in 1899.

He began the practice of law in Eureka, Utah, and came from there to Blackfoot, Idaho, in 1904, where he remained three years. The next four years he was a resident of Hailey, Idaho, and from there he came to Twin Falls in 1911.

He has been very successful in his chosen profession and stands high at the bar of Idaho, as is evidenced by his nomination in 1912 for the office of justice of the supreme court of Idaho. In line with his professional interests he affiliates with the Twin Falls County Bar Association and is a member of the American Bar Association. As a Democrat he has long taken an active interest in political affairs. While a resident of Hailey, Blaine county, he served as a member of the state senate during the tenth session of the state legislature and at that time supported both the direct primary law and the local option law and took a strong stand in favor of an effective employers' liability law.

In fact, all measures that had for their true aim the progress of the state and the welfare of its citizens received his unreserved commendation and stanch support. He was a Democratic candidate for congress in 1910 and, as previously stated, has now been nominated as a justice of the supreme court of Idaho.

His whole life has been spent in the West and he is well acquainted with the conditions and advantages of the various states of this section. From this knowledge and experience he asserts his firm belief that Idaho offers more opportunities for men and women of push and industry, of vigor and ambition, than does any other state of the Union. Bowen was married at Salt Lake City, Utah, February 12, 1898, to Miss Elizabeth Bernhart, a daughter of Mrs. One son and three daughters have been born to their union, namely: Theodore E. Bowen is associated with the Masonic order, the Independent Order of Odd Fellows, the Benevolent and Protective Order of Elks and the Woodmen of the World.

In the Independent Order of Odd Fellows he has "passed all the chairs" of his local lodge and is a member of the grand lodge of that order. He is also a member of the Twin Falls Commercial Club.

This item is in the category "Books\Antiquarian & Collectible". The seller is "goodstufffast1" and is located in Cincinnati, Ohio. This item can be shipped to United States.