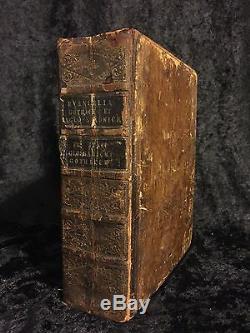 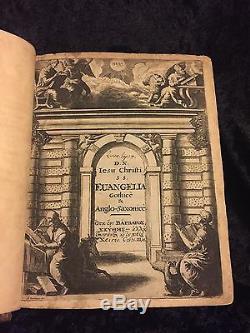 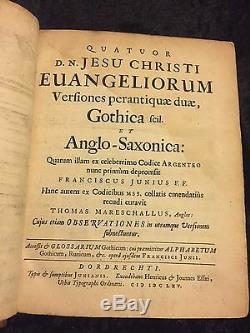 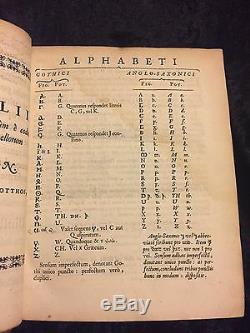 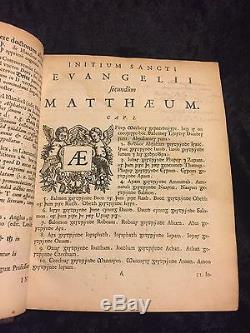 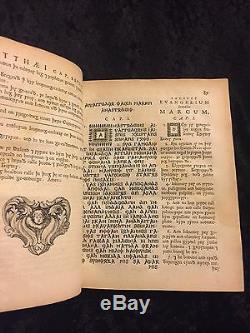 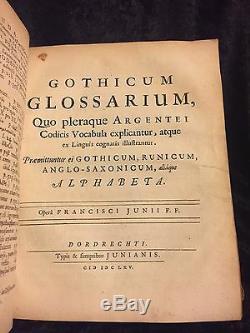 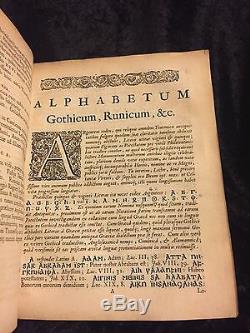 THE GOSPELS IN ANGLO-SAXON AND GOTHIC. A Rare Copy of the 1665 Gothic Bible Teutonic KJV. Bible in Anglo-Saxon and Gothic.

A fourth century, pre-English translation by Bishop Ulfilas 380-381 A. Used as a source text for the Authorized (King James) Version of the Bible.

In one, 4to 7 1/4 x 6 in. Additional engraved title after Santvoort, parallel texts in Anglo-Saxon and Gothic, with Roman, Greek, Hebrew and black letter types, engraved initials and tailpieces; some light dampstaining and browning. Full calf, spine gilt and with two lettering-pieces; rubbed and worn, upper cover repaired at inner hinge, lower cover detached. Printing press was not invented. All prior copies of this text were in manuscript.

It was printed for the first time in 1665, thus a first edition. JESU CHRISTI EVANGELIORUM VERSIONES PERANTIQUAE DUÆ, GOTHICA SCIL ET ANGLO-SAXONICA. DORDRECHT: HENRICUS AND JOANNES ESSAEI, 1665. The Gothic trnaslation of the Gospels has been ascribed to Ulfilas, a bishop of the Goths, who is also said to be the originator of Gothic script. Around 347, Ulfilas was forced to flee his homeland of Dacia and settle in Moesia.

It was here that he undertook the translation, which has survived in six manuscripts. The present edition was printed from a transcript of the text in the Codex Argentus made c.

1655 by a scholar named Derrer. The codex was brought as loot from Prague to Sweden where it became part of Queen Christina's library. He took it then to the Netherlands where this edition was produced.

Franciscus Junius, Vossius' uncle, provided the notes to both the Anglo-Saxon version, taken from an edition by Thomas Marshall, and the Gothic version, as well as the Gothic glossary. "Beyond their interest to the student of textual criticism, these fragments possess special value for the philologist as preserving what is'by several centuries the oldest specimen of Teutonic speech" (Darlow & Moule).

Specializes in early printed English Bibles, books, manuscripts, and objet dart. Are merely representative of our broader inventory. Please do not hesitate to enquire regarding other early printed books and manuscripts. In addition, we are currently offering one of the world's most significant collections of biblical manuscripts and early printed Bibles. The Legacy Collection may be viewed at: CrawfordSterling. The item "1665 FIRST EDITION Gothic BIBLE Anglo-Saxon RARE Old English TEUTONIC KJV" is in sale since Saturday, May 20, 2017. This item is in the category "Books\Antiquarian & Collectible". The seller is "collector1611" and is located in Munford, Alabama. This item can be shipped to United States.