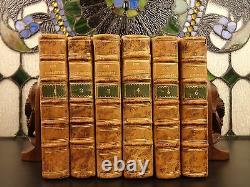 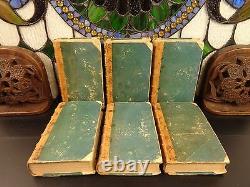 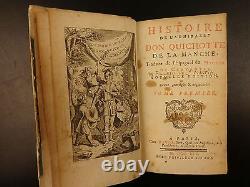 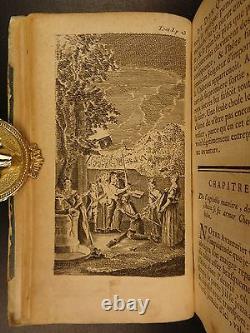 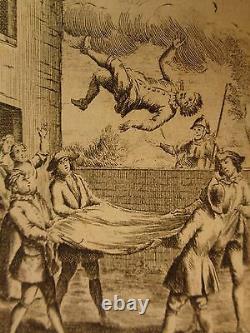 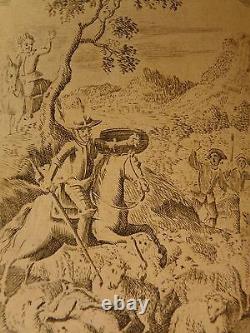 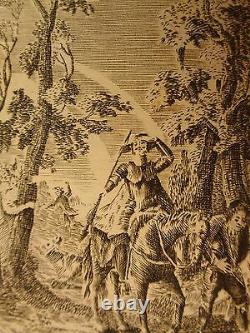 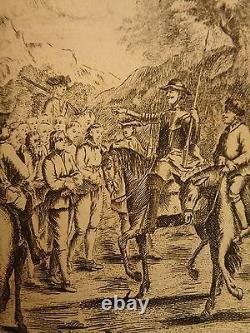 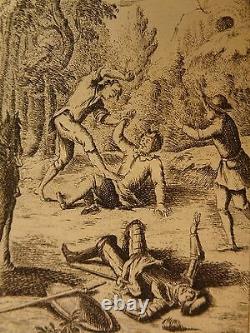 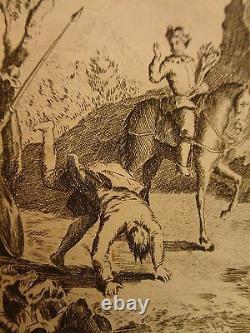 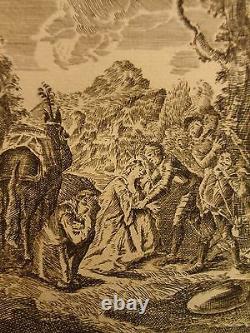 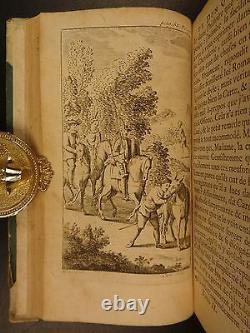 Don Quixote is one of the most famous and popular novels ever written! This set is a charming, complete 6 volume set!

Don Quixote fully titled The Ingenious Gentleman Don Quixote of La Mancha. Is a Spanish novel by Miguel de Cervantes Saavedra. It follows the adventures of Alonso Quixano, an hidalgo who reads so many chivalric novels that he decides to set out to revive chivalry, under the name Don Quixote. He recruits a simple farmer, Sancho Panza, as his squire, who often employs a unique, earthly wit in dealing with Don Quixote's rhetorical orations on antiquated knighthood.

Don Quixote /dn kwkst/[1] or /dn kihoti/; Spanish: [do kixote] (listen), fully titled The Ingenious Gentleman Don Quixote of La Mancha (Spanish: El ingenioso hidalgo don Quijote de la Mancha), is a Spanish novel by Miguel de Cervantes Saavedra. Published in two volumes, in 1605 and 1615, Don Quixote is considered one of the most influential works of literature from the Spanish Golden Age and the entire Spanish literary canon. As a founding work of modern Western literature and one of the earliest canonical novels, it regularly appears high on lists of the greatest works of fiction ever published, such as the Bokklubben World Library collection that cites Don Quixote as authors' choice for the "best literary work ever written". Don Quijote (Don Quixote) Illustration by Gustave Doré, depicting the famous windmill scene.

The story follows the adventures of an hidalgo named Mr. Alonso Quixano who reads so many chivalric romances that he loses his sanity and decides to set out to revive chivalry, undo wrongs, and bring justice to the world, under the name Don Quixote de la Mancha.

He recruits a simple farmer, Sancho Panza, as his squire, who often employs a unique, earthy wit in dealing with Don Quixote's rhetorical orations on antiquated knighthood. Don Quixote, in the first part of the book, does not see the world for what it is and prefers to imagine that he is living out a knightly story. Throughout the novel, Cervantes uses such literary techniques as realism, metatheatre, and intertextuality. It had a major influence on the literary community, as evidenced by direct references in Alexandre Dumas' The Three Musketeers (1844), Mark Twain's Adventures of Huckleberry Finn (1884) and Edmond Rostand's Cyrano de Bergerac (1897), as well as the word "quixotic".

Arthur Schopenhauer cited Don Quixote as one of the four greatest novels ever written, along with Tristram Shandy, La Nouvelle Héloïse and Wilhelm Meister. 1.1.1 The First Sally (Chapters 15). 1.1.2 Destruction of Don Quixote's library (Chapters 6 and 7).

This metafictional trick appears to be designed to give a greater credibility to the text, by implying that Don Quixote is a real character and that the story truly occurred several decades back. The First Sally (Chapters 15)[edit]. Alonso Quixano, the protagonist of the novel (though he is not given this name until much later in the book), is a Hidalgo (member of the lesser Spanish nobility), nearing 50 years of age, living in an unnamed section of La Mancha with his niece and housekeeper, as well as a boy who is never heard of again after the first chapter. Although Quixano is usually a rational man, his reading in excess books of chivalry has produced the distortion of his perception and the wavering of his mental faculties.

In keeping with the humoral theory of the time, not sleeping adequately because he was reading has caused his brain to dry; Quixano's temperament is thus choleric, the hot and dry humor. As a result, he is easily given to anger[4] and believes every word of these fictional books of chivalry to be true. Imitating the protagonists of these books, he decides to become a knight-errant in search of adventure. To these ends, he dons an old suit of armour, renames himself "Don Quixote", names his exhausted horse "Rocinante", and designates Aldonza Lorenzo, a neighboring farm girl, as his lady love, renaming her Dulcinea del Toboso, while she knows nothing of this.

Expecting to become famous quickly, he arrives at an inn, which he believes to be a castle; calls the prostitutes he meets "ladies" (doncellas); and asks the innkeeper, whom he takes as the lord of the castle, to dub him a knight. He spends the night holding vigil over his armor and becomes involved in a fight with muleteers who try to remove his armor from the horse trough so that they can water their mules. In a pretended ceremony, the innkeeper dubs him a knight to be rid of him, and sends him on his way.

Don Quixote next "frees" a young boy tied to a tree and beaten by his master, and makes his master swear to treat the boy fairly; but the boy's beating is continued as soon as Quixote leaves. Don Quixote then encounters traders from Toledo, who "insult" the imaginary Dulcinea.

Destruction of Don Quixote's library (Chapters 6 and 7)[edit]. While Don Quixote is unconscious in his bed, his niece, the housekeeper, the parish curate and the local barber burn most of his chivalric and other books. A large part of this section consists of the priest deciding which books deserve to be burned and which to be saved.

This gives occasion for many comments on books Cervantes liked and disliked. For example, Cervantes' own pastoral novel La Galatea is saved, while the rather unbelievable romance Felixmarte de Hyrcania is burned. After the books are dealt with, they seal up the room which contained the library, later telling Don Quixote that it was the action of a wizard (encantador). After a short period of feigning health, Don Quixote requests his neighbor, Sancho Panza, to be his squire, promising him governorship of an island, or insula. Sancho, who is both greedy and unintelligent, agrees to the offer and sneaks away with Don Quixote in the early dawn. It is here that their famous adventures begin, starting with Don Quixote's attack on windmills that he believes to be ferocious giants. The two next encounter a group of friars accompanying a lady in a carriage. Don Quixote takes the friars to be enchanters who hold the lady captive, knocks a friar from his horse, and is immediately challenged by an armed Basque traveling with the company. As he has no shield, the Basque uses a pillow to protect himself, which saves him when Don Quixote strikes him.

Cervantes chooses this point, in the middle of the battle, to say that his source ends here. Soon, however, he resumes Don Quixote's adventures after a story about finding Arabic notebooks containing the rest of the story by Cid Hamet Ben Engeli. The combat ends with the lady leaving her carriage and commanding those traveling with her to "surrender" to Don Quixote. Sancho and Don Quixote fall in with a group of goatherders.

Don Quixote tells Sancho and the goatherders about the "Golden Age" of man, in which property does not exist and men live in peace. The goatherders invite the Knight and Sancho to the funeral of Grisóstomo, once a student who left his studies to become a shepherd after reading pastoral novels (paralleling Don Quixote's decision to become a knight), seeking the shepherdess Marcela.

At the funeral Marcela appears, vindicating herself from the bitter verses written about her by Grisóstomo, and claiming her own autonomy and freedom from expectations put on her by pastoral clichés. She disappears into the woods, and Don Quixote and Sancho follow. Ultimately giving up, the two dismount by a pond to rest.

Don Quixote is given a bed in a former hayloft, and Sancho sleeps on the rug next to the bed; they share the loft with a muleteer. When night comes, Don Quixote imagines the servant girl at the inn, Maritornes, to be a beautiful princess, and makes her sit on his bed with him, scaring her.

Seeing what is happening, the muleteer attacks Don Quixote, breaking the fragile bed and leading to a large and chaotic fight in which Don Quixote and Sancho are once again badly hurt. Don Quixote's explanation for everything is that they fought with an enchanted Moor. He also believes that he can cure their wounds with a mixture he calls "the balm of Fierarbras", which only makes them sick. Don Quixote and Sancho decide to leave the inn, but Quixote, following the example of the fictional knights, leaves without paying. Sancho, however, remains and ends up wrapped in a blanket and tossed up in the air (blanketed) by several mischievous guests at the inn, something that is often mentioned over the rest of the novel. After his release, he and Don Quixote continue their travels. The adventures with Cardenio and Dorotea[edit]. After Don Quixote frees a group of galley slaves, he and Sancho wander into the Sierra Morena, and there encounter the dejected Cardenio. Cardenio relates the first part of his story, in which he falls deeply in love with his childhood friend Luscinda, and is hired as the companion to the Duke's son, leading to his friendship with the Duke's younger son, Don Fernando.

Cardenio confides in Don Fernando his love for Luscinda and the delays in their engagement, caused by Cardenio's desire to keep with tradition. After reading Cardenio's poems praising Luscinda, Don Fernando falls in love with her. Don Quixote interrupts when Cardenio suggests that his beloved may have become unfaithful after the formulaic stories of spurned lovers in chivalric novels. Don Quixote de la Mancha and Sancho Panza, 1863, by Gustave Doré.

In the course of their travels, the protagonists meet innkeepers, prostitutes, goatherders, soldiers, priests, escaped convicts and scorned lovers. The aforementioned characters sometimes tell tales that incorporate events from the real world, like the conquest of the Kingdom of Maynila or battles in the Eighty Years' War. Their encounters are magnified by Don Quixote's imagination into chivalrous quests. Don Quixote's tendency to intervene violently in matters irrelevant to himself, and his habit of not paying debts, result in privations, injuries and humiliations (with Sancho often the victim). Finally, Don Quixote is persuaded to return to his home village.

The narrator hints that there was a third quest, but says that records of it have been lost. The item "1754 Don Quixote Spanish Miguel Cervantes Chivalry 6v SET de Saint-Martin ART" is in sale since Wednesday, December 7, 2016. This item is in the category "Books\Antiquarian & Collectible". The seller is "schilb_antiquarian_books" and is located in Columbia, Missouri. This item can be shipped worldwide.