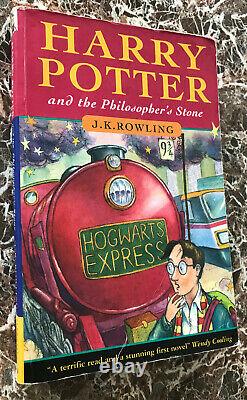 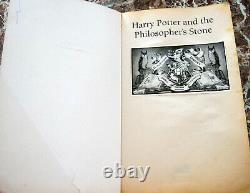 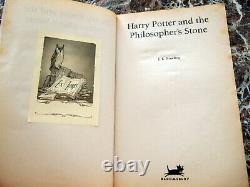 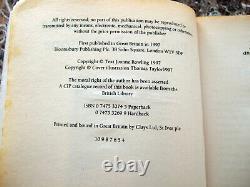 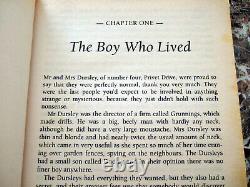 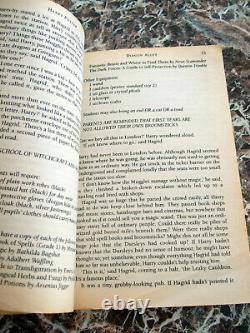 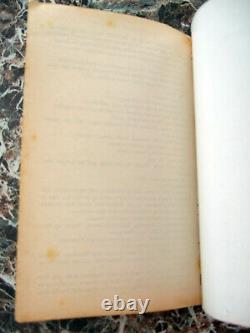 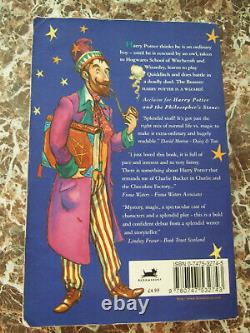 Hagrid whooped and clapped and Mr. Yes, indeed, oh, very good. Her e we offer an extremely early and rare stated first paperback edition, 4th printing, of the classic novel, Harry Potter and the Philosopher's Stone , known in the US as... Sorcerer's Stone, by J.

Rowling, published by Bloomsbury, London, in 1997. Also included in the sale is an attractive collection of ephemera: a laminated map of Hogwarts Castle, Harry's Hogwarts acceptance letter with necessaries list, and a train ticket to Hogwarts. There is much to be learned about collecting this title and much disinformation, even in the media. For instance: the "1 wand" misprint on page 53 is NOT an indication of an early edition it is corrected in some true 1997 printings--like this copy--and it can be found in books printed a decade later.

Another: If the book is dated "1997" it is not necessarily a 1997 printing (look, instead for mention of subsequent Harry Potter books). The earliest first "point, " or feature, identifying a first edition found in both the hardback and softcover version of Philosopher's Stone is the inclusion of a quote by children's author Wendy Cooling at the base of the front cover illustration, reading A terrific read and a stunning first novel. This copy we offer here, being a very early 4th printing, DOES have that extremely rare, early, and sought-after quote. It also features the very rare absence of any mention of any subsequent Harry Potter books. Pictorial laminated rear board features a brown-haired, rather than white-haired wizard. Page 15, line 3: Potters son was corrected to Potters son in later editions. Page 17, line 31: Ill be takin' Sirius his bike back was corrected to Id best get his bike away in later editions.

Page 31, line 34: Stray apostrophe not yet removed from before Harry could see.. Page 87, line 31: Hogwarts, a History was corrected to Hogwarts: a History in later editions. Page 168, line 9: Dittany in One Hundred Magical Herbs and Fungi was corrected to Dittany in One Thousand Magical Herbs and Fungi in later editions. Wraps have typical wear, including a small half-inch edge tear at the base of the front cover that I've secured with a bit of acid-free binder's tissue.

This will make a wonderful addition to your collection or a marvelous gift. Check out our shelf of other iconic fantasy and sci-fi firsts by clicking HERE! Have you seen all the amazing first and rare editions of iconic books we offer? -- other auctions of classic antiquarian literature and special gifts! Thank you for your interest!

Harry Potter &the Philosopher/Sorcerer's Stone, 1997Wendy Cooling" is in sale since Wednesday, August 7, 2019. This item is in the category "Books\Antiquarian & Collectible". The seller is "iconicfirsts" and is located in Bronx, New York. This item can be shipped worldwide.