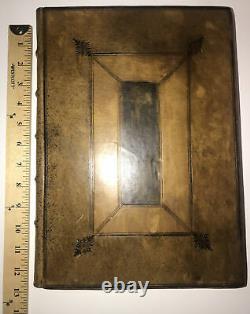 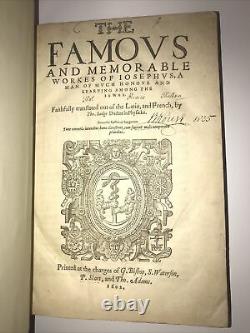 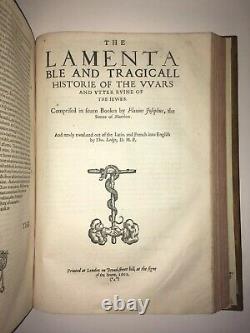 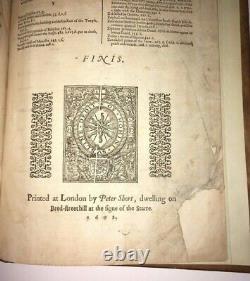 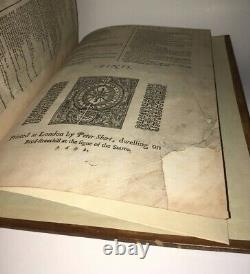 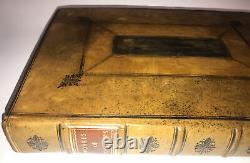 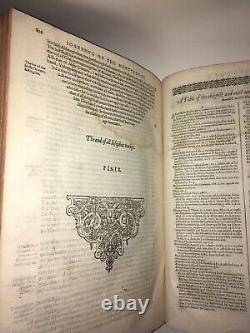 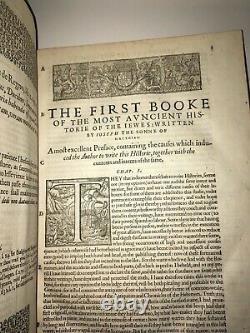 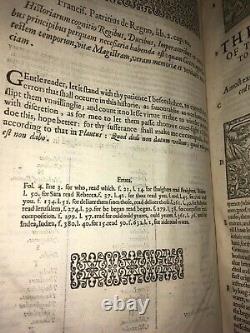 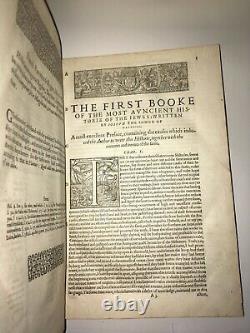 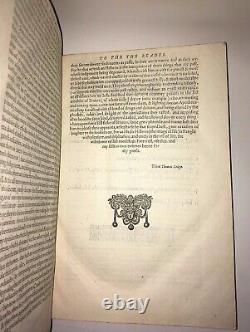 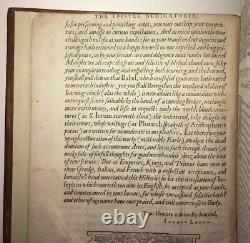 The FIRST ENGLISH EDITION of JOSEPHUS. THE FAMOUS AND MEMORABLE WORKES OF JOSEPHUS!

Prior to this book, Josephus had never before been printed in English. The Famous and Memorable Workes of Josephus. Faithfully Translated out of the Latin, and French. The second title page for: The Lamentable and Tragicall Historie of the Warres and Utter Ruine of the Jewes is also present, and is also dated 1602, as shown in picture 2. The pagination is for one book despite the second title page.

This book is complete with all five separate works of Josephus, both title pages, all prefaces, the Epistle Dedicatorie, errata, rear tables, and colophon. As is standard, only the two major works have a separate title page, both present.

This book is remarkably well preserved despite it's age. The entire text block appears entirely free of closed tears.

This book is over 400 years old. This is a rare book. There are no other copies currently for sale. Of the copies recently offered for sale, all were in poor condition. Rebound in a full leather binding. This is a CAMBRIDGE STYLE binding, from the mid 20th century. The colophon page is present, with marginal wear, and archival conservation to that page only. This book is textually complete. This book is in very good and highly presentable condition despite it's age. Impossible to obtain in this condition. Printed by Peter Short at the Charges of G. The Warres and Utter Ruine of the Jewes title page is also dated 1602. Printed At London By Peter Short, dwelling On Bed-street hill, at the signe of the Starre.

The first English Edition of Josephus was printed in 1602. A controversial figure, Josephus remains undeniably important in history, literature and the arts. Are among the most valuable sources for the study of early Judaism and early Christianity (Columbia University Press).

Without [these writings] little would have been known of the history of the Second Temple nor would it have been possible to write such a history In. Of literary talent Josephus ranks among the leading writers in world literature. His style is epic, his portrayals plastic, his gift of description captivates the reader alike by its fidelity and its colorful presentation. Thomas Lodge, was the first to publish the writings of Josephus in English, in 1602. This is the true FIRST ENGLISH EDITION of Josephus.

Translated by Thomas Lodge, printed in 1602. Colophon and title page are both dated 1602. This is the First English Edition of Josephus. It precedes Wiston's 1732 translation by 130 years. In exceptional and highly presentable condition.

Exceedingly rare and impossible to obtain, let alone in this condition. Additional pictures and detail will be added later.

This book is complete and in remarkable condition despite it's age. It has been rebound in full leather. There is some wear to the colophon page, with archival restoration to the margins, thereby preserving and protecting that page for longevity. There are minor tidemark stains showing towards the rear of the volume as shown in the pictures. The margins have presumably been cut, and not affecting text, with the closest margin being the Epistle Dedicatorie page, as shown in the pictures. This is a remarkable book is exceptional condition. Minor signs of use, minor sporadic stains, minor wrinkling to some of the rear page corners, minor usage wear, early names on the title page. Some abrasions along the bottom edge of the leather cover.

In exceedingly good condition despite being over 400 years old. Additional pictures are available upon request. This book will be properly protected.

The first English translation, by Thomas Lodge, appeared in 1602, with subsequent editions appearing throughout the 17th century. The works of Josephus are major sources of our understanding of Jewish life and history during the first century. 75 War of the Jews, or The Jewish War, or Jewish Wars, or History of the Jewish War (commonly abbreviated JW, BJ or War) c.

The lamentable and tragical history of the vvarres and utter ruine of the Jewes. The works of Josephus translated byThomas Lodge (1602). The item "FIRST ENGLISH EDITION of JOSEPHUS!) Ancient History Bible Jews" is in sale since Friday, September 13, 2019.

This item is in the category "Books\Antiquarian & Collectible". The seller is "merchants-rare-books" and is located in Moab, Utah. This item can be shipped worldwide.