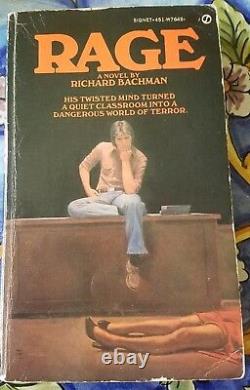 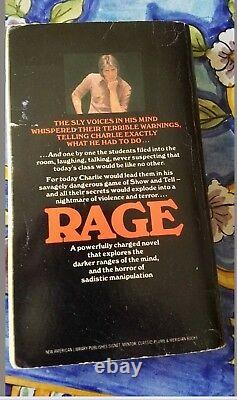 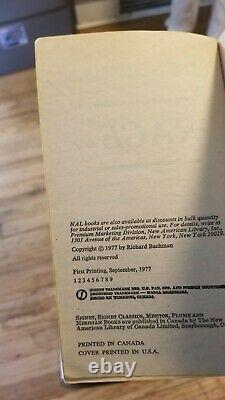 For sale is a FIRST EDITION, FIRST PRINTINGof Stephen King's Rage, published by Signet in 1977 under King's pseudonym Richard Bachman. For all King collectors, this item is the rarest of "The Bachman Books" and the most collectible by a wide margin given the book was removed from print at the request of the author due to the controversial storyline.

Moderate wear to the book. Creasing and some fading to the spine. Page block is clean and sturdy.

Small stamp on the back of the front cover. Please see pictures for additional detail. Stephen King didn't earn the title King of Horror by sticking to safe subjects or shying away from taboo characters. Vampires, children being run over by semi trucks, and a girl killing bully classmates with her telepathic powers titillated readers and fans, but never elicited outrage on a large scale.

Yet the most controversial King book of all time is one he wrote while still a 16-year-old high schooler. King wrote Rage in 1965 and published it in 1977 and 1985 under his pseudonym Richard Bachman. The novel focuses on a young man named Charlie Decker taking a gun to school to exact bloody revenge on teachers and students. After multiple real-life school shootings in the'80s and'90s mirrored aspects of the novel, garnering it media attention for possibly inspiring the rampages, King himself asked to have Rage pulled from print. Highly sought-after by banned-book enthusiasts today, used copies of Rage can only be found by luck or acquired at great expense.

King's move to suppress his own writing in the wake of controversy deserves an examination, along with the book itself, to fully understand its impact as well as the thin line between entertainment and inspiration. The item "Rage A novel by Richard Bachman RARE COLLECTABLE" is in sale since Monday, July 6, 2020. This item is in the category "Books\Antiquarian & Collectible". The seller is "dame102720" and is located in Washington, District Of Columbia.

This item can be shipped to United States, Philippines, Cayman islands.