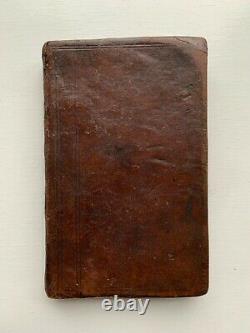 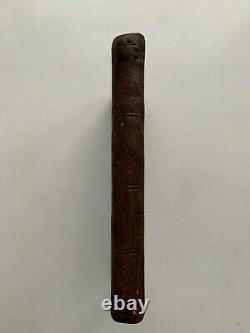 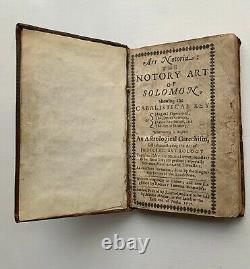 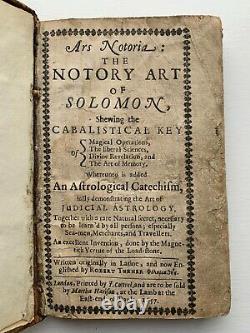 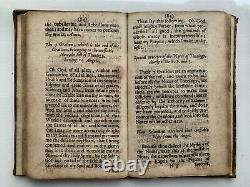 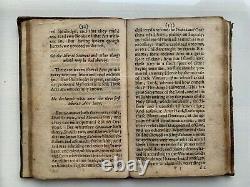 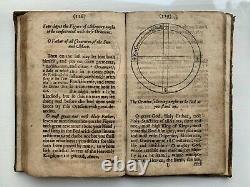 The notory art of Solomon, shewing the cabalistical key of magical operations, the liberal sciences, divine revelation, and the art of memory. Whereunto is added An astrological catechism, fully demonstrating the art of judicial astrology. Together with a rare natural secret, necessary to be learn'd by all persons; especially sea-men, merchants, and travellers. An excellent invention, done in the magnetick vertue of the load-stone. Publisher: London, printed by J. 8vo (9 x 14.5cm) [8], 168pp. Title within border of type ornaments, two woodcut diagrams in the text, second part with separate title page: "An astrological catechisme, wherein the art of judicial astrology is fully demonstrated by way of question and answer", some marginal fraying to first few leaves, not affecting text, some light toning throughout, endpapers renewed, contemporary unlettered calf, ruled in blind. The first English printing of an important text of Solomonic ceremonial magic, this English version of the Ars Notoria was translated by the astrologer and botanist Robert Turner fl. Turner was the author of two books, Mikrokosmos: a Description of the Little-World (1654) and Botanologia: the Brittish Physician (1664), but is chiefly known for at least ten translations of medical and astrological works published between 1655 and 1658. Along with John Hester, John Harding, John French, Richard Russell, William Cooper, William Dugard, and Henry Pinnell, he was one of an important group of translators who supplied English audiences with a wide range of occult and medical treatises and particularly with the writings of Paracelsus (ODNB). "The foundation and essence of the practices described in the Ars Notoria lies in the figures or "notes that give it its title.

These consist partly of realistic illustrations, partly of sigils and signs similar to other grimoires of the day, and partly of text, which winds into and around the graphical elements. When used as objects of contemplation (or in a more active use of visual imagination) the notes are said to place the user's mind in a state in which it is granted complete knowledge or skill in one of the seven Liberal Arts. Unfortunately, Turner's translation did not include these figures.. The text instructs the practitioner to "look into" or "inspect" the note with which he is working several times a day, and to recite certain prayers and magical names during a portion of those occasions.

The specific prayers and names are integrated into the visual portion of the note in some instances, and it is not known whether these integrated prayers are among the many translated by Turner. Even by the standards of the time, the book was not a great example of the typographer's art; it was cheaply printed, and was clearly typeset by three different people.. "A Certain Magnetick Experiment", describes a device for long-distance communication based on an imaginary property of magnetized iron. "An Astrological Catechisme", is a translation of a Latin document by Leovitius, partially rewritten by Turner. It presents a series of questions and answers concerning astrology and its practice (Benjamin Rowe, from a forward to a transcription of Turner's version of Ars Notaria, 1999). Lowndes 2724 (noting that "this was complained of in Parliament during the Commonwealth"). The item "Turner Ars Notoria 1st edition 1657" is in sale since Wednesday, December 16, 2020. This item is in the category "Books, Comics & Magazines\Antiquarian & Collectable". The seller is "aeneas3" and is located in Huddersfield. This item can be shipped worldwide.