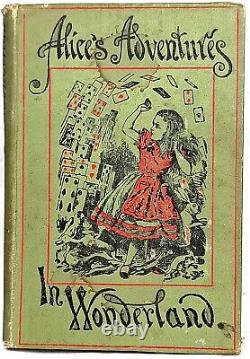 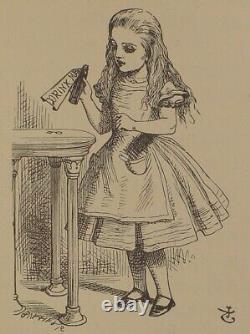 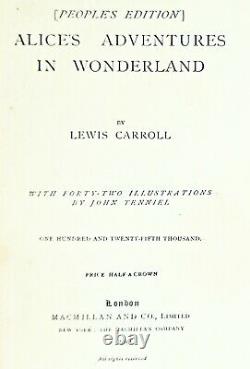 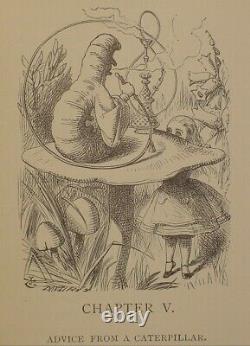 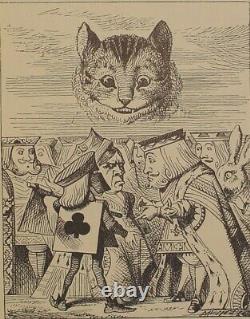 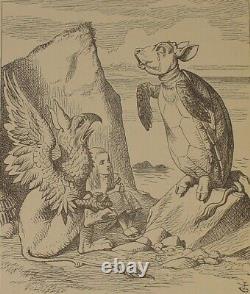 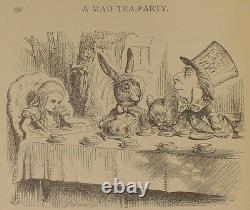 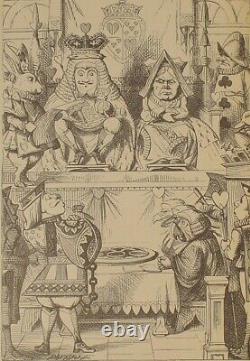 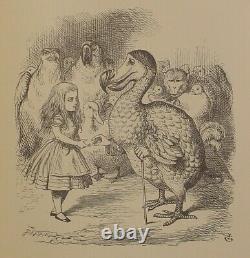 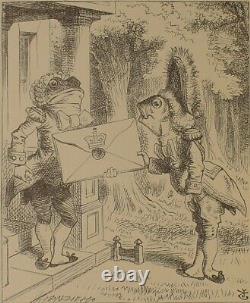 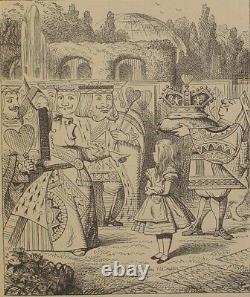 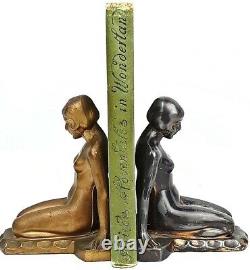 GET IT WHILE YOU CAN!! Is for an original RARE! 1904 edition of " ALICE'S ADVENTURES IN WONDERLAND " by Lewis Carroll. YOU'LL LOVE THIS BOOK!! It is filled with 42 ILLUSTRATIONS!!! Original "Alice" artist, Sir JOHN TENNIEL. I t is a work of children's literature by the English mathematician and author, Reverend Charles Lutwidge Dodgson, written under the pseudonym Lewis Carroll. It tells the story of a girl named Alice who falls down a rabbit-hole into a fantasy realm populated by talking playing cards and anthropomorphic creatures. The tale is fraught with satirical allusions to Dodgson's friends and to the lessons that British schoolchildren were expected to memorize. The Wonderland described in the tale plays with logic in ways that have made the story of lasting popularity with adults as well as children. A girl named Alice is bored while on a picnic with her older sister. She finds interest in a passing white rabbit, dressed in a waistcoat and muttering Oh dear! I shall be too late! She follows it down a rabbit-hole where she finds herself floating down into a dream underworld. As she attempts to follow the rabbit, she has several adventures. She grows to gigantic size and shrinks to a fraction of her original height; meets a group of small animals stranded in a sea of her own previously shed tears; gets trapped in the rabbit's house when she enlarges herself again; meets a baby which changes into a pig, and a cat which disappears leaving only his smile behind; goes to a never-ending tea party; goes to the shore and meets a Gryphon and a Mock Turtle; and attends the trial of the Knave of Hearts, who has been accused of stealing tarts. Eventually, Alice wakes up back with her sister. P ublished in 1904, this rare, classic, children's book is in GOOD+ CONDITION for any age and especially to be 118 YEARS OLD!!!

With NO stray intext markings. There are NO destructive tears; yet , there are a few minor margin tears throughout, which is to be expected in a book of this advanced age. It measures 5" X 7 1/4" and is complete with 187 pages.

E arly "Alice" books are very scarce and in high demand so.. Those of you familiar with our auctions may wonder what we're doing including "ALICE IN WONDERLAND" in our auctions? Well, the original manuscript for this classic bedtime story was written right in the middle of the Civil War, in 1862. This is what ordinary Americans were reading as entertainment at the time.

It provided temporary escape and relief from the ravages of the War. Charles Lutwidge Dodgson, was a mathematician and a logician who lectured at Oxford for some 26 years. He was also an accomplished photographer and a Church Deacon. Dodgson's pen name was Lewis Carroll. Dodgson first told the story during a 2½ hour rowing trip with friends on July 4th, 1862. He created the story on the spur of the moment to entertain the three young daughters of the Dean of Christ Church at Oxford, (Alice, Lorina, and Edith Liddell). 10 year old Alice later pleaded with Carroll to commit the story to paper. He completed it the following February. This first manuscript, called "Alice's Adventures Underground" is thought to have probably been destroyed in 1864 when, on November 26th 1864, Dodgson presented Alice Liddell with a more elaborate hand-printed second version which included 37 of his own illustrations as a Christmas present. Reverend Dodgson later showed the tale to his friend George Macdonald, who urged him to publish it. He then revised and expanded the tale to almost twice its length. This third version was published by Macmillan and Co. In London, on July 4th, 1865. Sir John Tenniel was the artist who agreed to illustrate the revised and expanded text which was now called Alice's Adventures in Wonderland. Tenniel's black and white illustrations were made for the reproductive process known as wood-engraving. Please see our other books too! This item is in the category "Books & Magazines\Antiquarian & Collectible". The seller is "rebel_soldier" and is located in this country: US. This item can be shipped worldwide.