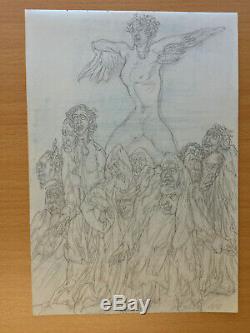 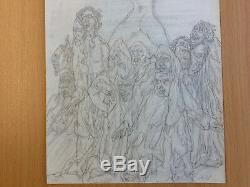 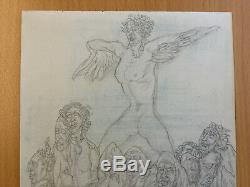 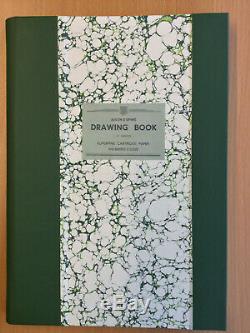 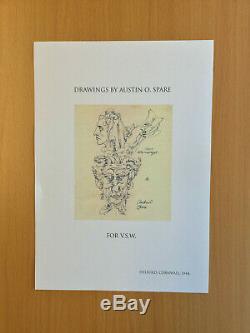 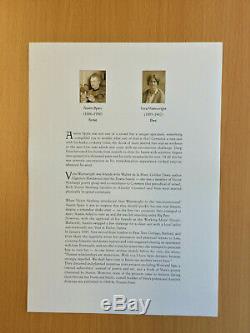 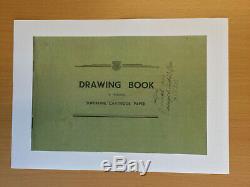 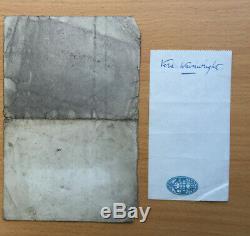 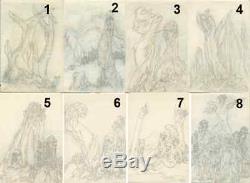 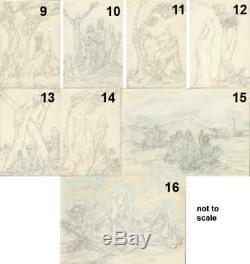 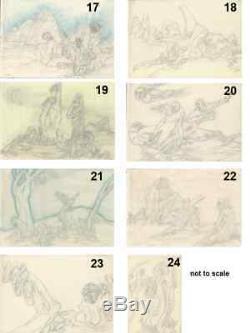 Austin Osman Spare PORTFOLIO A sketchbook for Vera Wainwright Limited Edition of 24 Copies in half-leather binding with marbled boards with a superb original signed Austin Spare Drawing as issued PLUS An Austin Spare Cheque payable to Vera Wainwright Signed by Austin Spare on the Front and Vera Wainwright on the Reverse PLUS A letter written and signed by Vera Wainwright to Austin Spare 29th December 1944 Published by Mandrake Press Ltd. Thame 2005 This is the publishers personal copy and is in Mint Condition having been wrapped and stored flat since publication. Exceedingly rare Portfolio featuring 24 high quality facsimile reproductions of a complete sketchbook by Austin Osman Spare One of 24 copies issued with an original drawing from the sketchbook. Artist's drawing book, staple-bound, card-covered drawing book containing twenty-four full-page drawings in coloured chalks and pencil on paper 17.6 by 25.7cm. VERA WAINWRIGHT & AUSTIN OSMAN SPARE.

This item includes :- An Austin Spare Cheque payable to Vera Wainwright Signed by Austin Spare on the Front and Vera Wainwright on the Reverse and A letter from Vera Wainwright written to Austin Spare 29th December 1944. Austin Spare was not one of a crowd but a unique specimen: something compelled you to wonder what sort of bird is this? Certainly a rara avis with his husky, cockney voice, the shock of dusty matted hair and an avidness in the grey-blue eyes which met yours with an unconscious challenge. Deep lines furrowed his cheeks from nostrils to chin; his hands with sensitive fingers were grimed of a thousand years and his nails receptacles for soot.

Of all this he was serenely unconscious as his tatterdemalion appearance evoked surprise wherever he went. Vera Wainwright was friends with Walter de la Mare, Golden Dawn author Algernon Blackwood and the Powys family she was a member of Victor Neuburgs poetry group and a contributor to Comment (his periodical of verse). Both Victor Neuburg (acolyte to Aleister Crowley) and Vera were marred physically by spinal curvatures When Victor Neuburg introduced Vera Wainwright to the unconventional Austin Spare it was no surprise that they should quickly become true friends, despite a somewhat shaky start on the first two occasions they arranged to meet, Austin failed to turn up and she was left standing under Big Ben. However, with the approval of his friends at the Working Mens Hostel, Walworth, Austin swapped a few drawings for a clean suit with a local tailor and eventually met Vera at Purley, Surrey. Eventually, with an offer to pay his return fare, she managed to persuade him to visit her in one letter, written shortly before his visit, she wrote, Human relationships are mysterious. With you I have been dynamic because strongly impelled. We shall have time to know one another better here. They discussed and planned numerous joint projects including'Word and Sign', a limited subscribers journal of poetry and art, and a book of Veras poetry illustrated by Austin. However, none of the projects came to fruition during their lifetime but Poems and Masks, a small booklet of Veras poems and Austins drawings was published in 1968 by Toucan Press. The portfolio presents high quality reproductions of all 24 drawings from a sketchbook that Spare presented to Vera wainwright following his visit to her cottage in the Cornish village of Helford in 1944. The reproductions are made on 160gsm 100% cotton paper. Also reproduced is the cover of the sketchbook showing Spare's inscription to Wainwright and a pen drawing by him of the two of them together.

She is shown in regal profile, her face akin to a Spare mask, the lines entwining with his face below, looking out as a gnarled, horned devil. There is also a one page introductory sheet describing Spare and Wainwright and their relationship. This sheet reproduces photographs of them both. A sheet is provided showing thumbnail images of the drawings recording the order of the of drawings. All the above are enclosed in a handmade portfolio (10ins x 13ins) bound in half leather (a green basil sheepskin) and handmade marbled paper.

The design being chosen as the chance pattern of marbling is sympathetic to the style of some of Spares automatic drawings. All components used are of archival quality. Some of the drawings have a subtle addition of coloured pastels. They show strange landscapes, some time with "vibrationary" (to use Spare's term) where Spare perceives and portrays an aura. Usually Spare saw this of humans, here he sees it of the landscape itself.

These strange vistas are populated by anthropomorphic trees and rocks; strange beasts that emerge from the earth; transformative beings, soul like masks blowing in the wind. Portfolio Folder, made with half-leather & marbled paper boards, & containing manila-like folders, which hold the reproduced prints, from the original Drawing Book of 1944.

A tree-like figure and fungi-like form emerges from a jumble of heads Drawing 7 : Pencil. A claw-footed bird woman appears to be conversing with a sphinx-like figure melting into rock. A finely drawn horned face looks on from behind one of three tree figures Drawing 8. Original drawing is included with this portfolio Pencil and coloured chalk. A group of figures with finely drawn faces and masks, one being horned look out.

Behind and above them looms a transformative being, her torso twisted around so she faces forward, her legs backward, her stumpy arms changing to wings Drawing 9 : Pencil. Anthropomorphic trees twist and arise amid rocks.

The finely drawn head of a bearded patriarch looks out. Drawing 10 : Pencil and coloured chalk. A female figure stands amongst anthropomorphic trees, she is accompanied by a male figure but it is unclear whether he is man, tree or stone. This one has a title, in the bottom left corner Spare has written the word "Hate" Out of dancing lines, strange tree boughs arise and mesh and in the branches two faces go head to head.

From the branches a breasted lizard monster with twisted limbs sends out her tongue which turns to fire Drawing 13 : Pencil. Not wholly incarnate trees arise from the ground, behind broken rocks have finely drawn human faces, An enigmatic man kneels on the ground whilst another stands twisting his arm behind his head in a characteristic Spare gesture.

In the foreground a bird looks out. Behind it tree-like forms rise up but seem less than fully incarnate.

A finely drawn satyr hails something we cannot see, disjointed female figures, their bodies one with the landscape, share his gaze. Behind them rises a behemoth, part giant rock, part beast with finely drawn horned head. Rocks, some drawn with the shimmering line which for Spare perhaps suggests something slipping into (or out of) manifestation. The lines suggest a writhing figure.

Drawing 19 : Pencil and coloured chalk. Anthropomorphic tree boughs, their branches becoming arms twisted behind the head in a typical Spare gesture, arise from a stony landscape beneath the quarter moon. One is pawed by a grotesque satyr-like animal. Ethereal beings with finely drawn faces push up into the sky, looking back at a male figure who may be dying.. Above them a mask being a soul?

Finely drawn quatych of faces atop a rock torso stands as a form bursts out of the ground into manifestation, its nature as yet unclear. Two columns of thereal lines rise up into manifestation. One gives rise to a body with breasts which twists back into a Janus head and then shimmers up into a monkey head. The other rises, perhaps from mushrooms into swirling shapes reminiscent of buds opening.

Man/animal and plant life forces perhaps? The item "Austin Spare Portfolio + Original Drawing + AOS Cheque + Vera Wainwright letter" is in sale since Friday, May 3, 2019. This item is in the category "Books, Comics & Magazines\Antiquarian & Collectable". The seller is "lcocs2" and is located in Louth. This item can be shipped worldwide.