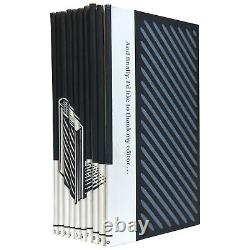 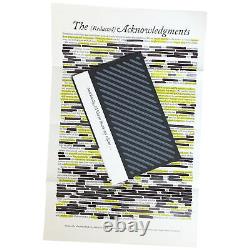 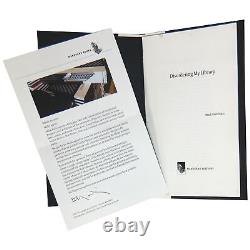 All ten volumes in the "spines" series, also called a series of essays on aspects of books and publishing. Ed Marquand is a book artist based in Seattle and Tieton, Washington, who makes editions of books for artists and museums and, from time to time, produces his own work as Marquand Editions. The contributors to this series are mostly writers and artists working with museums and museum presses.

Each author contributes a short essay on some aspect of their practice (number 7 in the series is a sequence of images, rather than words-a visual essay). The books are printed letterpress and are handbound in decorated paper over boards. The series, referred to as "Spines" in the introductory notes accompanying most of the books, takes its name from the first volume in the series, written by Marquand, On Spines and Memories. In that essay he ruminates on the spines of books, which receive little attention from designers although they are the part of the book that people look at every day.

The design conceit of this series is that, except for the titles, the design of each book cover is the same, except for the spine. The series was published in an edition of 500 copies for each book, some of which were for sale, but most copies were mailed to friends of the press or otherwise distributed outside of normal commercial venues. Only two libraries, Stanford University and the Amon Carter Museum library, own all ten volumes. The series consists of: 1. On Spines and Memories by Ed Marquand 2.

Genetic Code by Thomas Frick 3. Disordering My Library by Mark Polizzotti 4. Getting My Hands Dirty by Jacky Colliss Harvey 5.

When This Book Is Found by Will Gillham 6. What Is Reading by James Leggio 7. A Pictured Text, for E. Gloss by Eve Sinaiko 9. Peas and Queues: On Letter-Press Printing by Rick Brettell 10.

And Finally, I'd Like to Thank My Editor by Nancy Grubb with the folded broadside "The (Redacted) Acknowledgments" laid in This set also includes printed notes that Marquand sent with eight of the ten volumes (all except 1 and 5). It seems likely that those volumes were accompanied by notes as well, but your humble cataloguer cannot be sure of that fact.

The seller is "downtownbrown" and is located in this country: US. This item can be shipped worldwide.