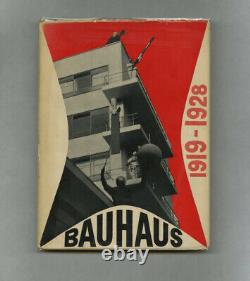 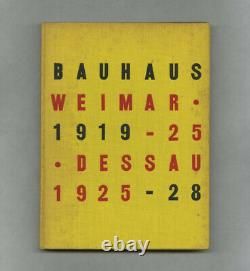 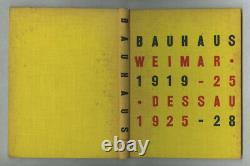 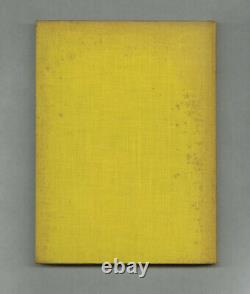 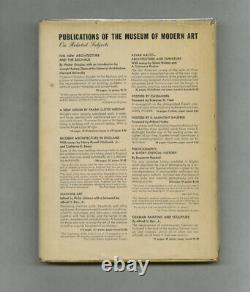 Edited by Herbert Bayer, Walter Gropius and Ise Gropius. Nice 1938 MoMA First Edition with Dust Jacket. Herbert Bayer, Walter Gropius and Ise Gropius [Editors]: BAUHAUS 1919 1928. New York: Museum of Modern Art, 1938. Yellow screen-printed and embossed cloth decorated in black and red. The rare dust jacket is lightlyand uniformlychipped along the top edge, and the spine is faintly browned with a chipped heel. Yellow boards lightly soiled, and endpapers mildly toned to gutters: as usual for this edition. The yellow spine displays none of the sun darkening usually associated with this edition. Book design and typography by Herbert Bayer.

A very important and scarce book in the original first edition. One of the nicest copies we have handled: A very good copy in a nearlyvery good dust jacket that displays well under archival mylar.

7.75 x 10.25 hardcover book with 224 pages and 550 illustrations. Orignal 1938 MoMA monograph devoted to the influence of the Weimar and Dessau Bauhaus under the directorship of Walter Gropius. One of the most important art books of the twentieth century.

From the book: The book is a point-for-point record of actual programs and projects at the Bauhaus, prepared by Herbert Bayer under the general editorship of Walter Gropius and with the collaboration of a dozen other Bauhaus teachers -- including Kandinsky, Klee, Feininger, Schlemmer, Itten, Moholy-Nagy, Albers, and Breuer. Rather than a retrospective history, here is a collection of photographs, articles, and notes prepared on the field of action. It may be considered as much a work of the Bauhaus as it is a work about it; even the typography and layout for the volume were designed by a former Bauhaus master. This book on the Bauhaus was published in conjunction with the Museum Of Arts exhibition, Bauhaus 1919-28. Like the exhibition, it was for the most part limited to the first nine years of the institution, the period during which Gropius was director.

For reasons beyond the control of any of the individuals involved, the last five years of the Bauhaus could not be represented. During those five years much excellent work was done and the international reputation of the Bauhaus increased rapidly, but, unfortunately for the purposes of this book, the fundamental character of the Bauhaus had already been established under Gropius' leadership. This book is primarily a collection of evidence - photographs, articles and notes done on the field of action, and assembled here with a minimum of retrospective revision. In 1938 MoMA issued a press memo informing New York City editors that on December 7, the Museum would open what will probably be considered its most unusual exhibitionand certainly one of its largest.

That exhibition was Bauhaus: 19191928, an expansive survey dedicated to this incomparably influential German school of art and design. On display were nearly 700 examples of the schools output, including works of textile, glass, wood, canvas, metal, and paper. It was a celebration of the remarkable creativity and productivity of the Bauhaus, which had been forced to close under pressure from the Nazi Party just five years prior. The size and scope of this tribute indicated the importance of the Bauhaus to MoMA's development: the school had served as a model for the Museums multi-departmental structure, and inspired its multidisciplinary presentation of photography, architecture, painting, graphic design, and theater. The exhibition includes paintings, architectural models and plans, original ballet costumes, photographs and cameraless photographs, typography, furniture, lighting fixtures, rugs, textiles, mobile sculpture, tin and paper sculptures, metal and glass dishes, an abstract motion picture film and many other objects, which the Museum of Modern Art, 14 West 49 Street, New York, will open to the public Wednesday, December 7.

The exhibition is under the auspices of the Museum's Department of Architecture and Industrial Art. It has been organized and installed by Herbert Bayer, one of the former masters at the Bauhaus. It will fill all the Museum's galleries and will comprise about 700 individual items in wood, metal, canvas and paint, textiles, paper, glass and many other substances.

The entire installation will exemplify, as far as possible in the given gallery space, the Bauhaus principles of exhibition technique in which clarity and arresting arrangement are combined. For example, the Museum floorstraditionally not part of an exhibitionwill be decorated with painted guidelines, footprints and abstract forms which will not only direct the visitor step by step through the exhibition but will bear artistic relation to the actual physical shape of each gallery and the type of the objects exhibited in it.

In 1919, after much preliminary work, Walter Gropius merged the Weimar Art Academy and the Weimar Arts and Crafts School to form the Bauhaus, Its first proclamation declared that The complete building is the final aim of the visual arts. Architects, painters and sculptors must recognize anew the composite character of the building as an entity. The Baulmus was not merely a school in the ordinarily accepted sense but, much more, a community of architects, painters, sculptors, engineers, photographers and craftsmen who contributed their special talents and experience.

The pupils studied and experimented under their direction. All, working together, continued to "learn by doing, " discovering new principles and developing new techniques. Designs created in the Bauhaus were used in mass production. In this way the Bauhaus bridged the gap between the so called "fine arts" and industry.

It also began to solve the problem of fitting the artist to take his place in the machine age. As it grew in influence and reputation the Bauhaus brought together on its faculty more artists of distinguished talent than has any other art school of our time. At the beginning the Bauhaus had about 225 students chiefly from Germany and Austria; within a few years at least 50% of its students came from other European countries and the United States.

Approximately two-thirds of them were men and most of them were in their early twenties. The Bauhaus masters, or teachers, were Walter Gropius, its founder and first director, Kandinsky, Klee, Feininger, Schlemmer, Itten, Moholy-Nagy, Albers, Bayer, Breuer, Stoelzl and others.

In 1925 the Bauhaus moved from Weimar to Dessau, where the new Bauhaus building, designed by Gropius and decorated, furnished and equipped in collaboration with the Bauhaus workshops, was completed in 1926. In the development of modern architecture it was the most important and influential modern building of the 1920's. In 1928 Groplus left the active directorship of the Bauhaus. Together with Bayer, Breuer and Moholy-Nagy, to devote their time to private practice. During the first decade of its existence hundreds of Bauhaus students went out into the world spreading by their works more than through their words the new doctrine of the Bauhaus unity of art, architecture and industrial design. In his preface td the book which the Museum of Modern Art is publishing in connection with the exhibition, Alfred H. Director of the Museum, writes. The world began to accept the Bauhaus. In America Bauhaus lighting fixtures and tubular chairs wore imported or the designs pirated. American Bauhaus students began to return; and they were followed, after the revolution of 1933, by Bauhaus and ex-Bauhaus masters who suffered from the new government's illusion that modern furniture, flat-roofed architecture and abstract painting were degenerate or Bolshevistic.

In this way, with the help of the fatherland, Bauhaus designs, Bauhaus men, Bauhaus ideas, which taken together form one of the chief cultural contributions of modern Germany, have been spread throughout the world. The exhibition will be open to the public from December 7 until the end of January, closing only on Sunday, December 25, Christmas Day, and Sunday, January 1, New Year's Day. NOTE: Under existing conditions in Germany it was not possible to bring more actual objects to this country for the exhibition. Limited to objects which were available, supplemented by enlarged photographs, the exhibition does not show the entire scope of the Bauhaus in every field of its work.

Although most of the objects and designs shown were made more than a decade ago, they were based on such sound principles of beauty and usefulness that even today many of them seem well above the level or ordinary contemporary design. However, the principal theme of the exhibition is the Bauhaus as an, idea. That idea seems as valid today as it was in the days when the Bauhaus flourished.

For an excellent and ever-changing selection of rare and out-of-print design books and periodicals covering all aspects of 20th-century visual culture. Please contact me for details. The item "1938 Herbert Bayer + Walter Gropius BAUHAUS 1919-1928 the MoMA 1st edition with DJ" is in sale since Tuesday, November 5, 2019. This item is in the category "Books & Magazines\Antiquarian & Collectible". The seller is "modernism101" and is located in Shreveport, Louisiana. This item can be shipped worldwide.