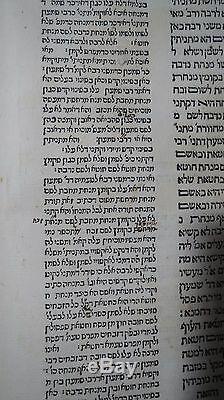 Tractate Menachot Venice, 1522 Bomberg Printing, First Edition. With Rashi commentary and Tosfot. Almost complete copy of 109 pages of 112. 2-110, without title page and and missing. [2] leaves at the end. Omissions which were professionally restored, including reconstruction of text where damaged.

Attractive copy with very wide margins. Please ask for more pictures I will send the message. First complete edition of the Talmud printed in. Printing is clear and bright. Antique hand-written notes on the margins.

Daniel Bomberg The Greatest of Hebrew. Outstanding printer of Hebrew books in the first. Century of the history of print, was the son of a. Christian merchant, born in Antwerp, Belgium. He left his hometown at an early age and settled.

In Venice where he established the first Hebrew. Printing press in the city. In spite of being a non-Jew.

Daniel Bomberg was the foremost printer of Hebrew. Books in the 16th century and had a crucial influence. On the development of Hebrew printing and on other.

Printers of his generation and future generations. Between the years 1516 and 1549 Bomberg printed. Nearly 250 Hebrew books including some of the.

Most important basic books which came off his. Press setting a standard of beauty and perfection.

Later on many Hebrew presses were. Established in Venice by Christian entrepreneurs.

Were Marco Antonio Justinian and Alvise Bragadini. The commercial fights between the latter led to. Venice became an empire of Hebrew printing of all. The books printed in Bomberg Press were well known. For their beauty and elegance and have been imitated. Throughout generations by numerous printers.

Bomberg Press used paper and ink of exceptional. Quality and the typesetting was meticulous and. The beauty and quality of the press were. Most probably the reasons for Bomberg's success. The design of the letters was so splendid that printers.

Praised their books as printed in "Bombirgi Letters". Complete edition of the Talmud printed in.

One of the masterpieces printed by Bomberg, and. His most impressive achievement, was the printing. Talmud have been printed in Spain prior to the.

Expulsion of Jews and later in the Soncino family. Printing press, but Bomberg's edition is the first. Complete one from Seder Zera'im to Seder Taharot. This famous edition ("Venice print") turned to be the.

Master edition and served as a basis and reference. For printing this edition Bomberg. Obtained special permission from Pope Leo X and.

Employed Jewish scholars and proofreaders who. Assisted in publishing this perfect set.

Goal Bomberg gathered all the manuscripts which he. Could find in order to publish a version which would. Be as accurate as possible.

Manuscripts of the Talmud, of Rashi commentaries. For that reason this edition. In addition, this edition is. Almost free of censorship disruptions as opposed.

To earlier tractates which have been printed by the. The project was of immense volume and included. Arrangement of the version according to various.

Manuscripts, proofreading and printing and was. Completed in an unprecedented speed. The complete Talmud was printed, by this order.

Tamid, Midot, Semachot, Kalah and Sofrim and by. That the printing of the Talmud has been terminated. Pesachim tractate does not bear a date and it might. Have been the first to be printed. This edition introduced the typographic format.

Of a Gemara Leaf (Tzurat HaDaf) for generations. The numbering of pages appeared here for the first. Time as it is known today, and became the accepted. Numbering in most of the editions of the Talmud that. Followed the Venice edition to the Vilnius edition. And the editions printed nowadays. As suitable for the Bomberg printing press, the.

Tractates were printed on paper of fine quality, and. The letters are set spaciously and clearly using ink of. A minimal title page precedes. The first word of each tractate is.

Ornamented with a floral decoration. And Rambam commentary are printed in the end of. This edition was the first to add ROSH. Verses at the end of each tractate and ever since they. Appear in all of the Talmud editions that followed.

By the Jews Cornelio Edelkind of Padua who was the. Proofreader of the first edition. The second edition is similar to the first one; however. Some changes and improvements have been. In Eiruvin, Pesachim, Shekalim, Sukah. And Shavu'ot the version was corrected according.

Eiruvin tractate was divided into paragraphs, and. The Ashrei glosses were added unlike the first edition. The two editions are very similar and it is not easy. To distinguish between them, but there are some.

The main difference is in the titles. Second edition (as well as in the third edition), the. Title of each tractate appears on the right side of the. Leaf number, as common today.

The title of the tractates does sometimes not appear. At all while in others it appears to the left side of the. The popularity and success which Bomberg's Talmud. Gained led to the appearance of a competitor, a.

Venetian nobleman by the name of Marco Antonio. Justinian who founded a Hebrew printing press. Hired Jewish workers and proofreaders and printed. The complete Babylonian Talmud in the years 1546.

This is in fact the third edition of the Babylonian. Talmud printed in Venice following the two editions. Printed by Bomberg and also gained much success. Bomberg tried to push Jusinian aside and started. To print in 1548, while Justinian printed his edition. An additional edition, but he lost the "war" since he. Which are attributed to Bomberg's third edition have. Not at all been reprinted but were in fact copies of. Bomberg added new title pages in order to create the. Impression that he competes with Justinian and is. The item "Babylonian Talmud Tractate Menachot venezia Bomberg 1522 First Edition Hebrew" is in sale since Sunday, May 22, 2016. This item is in the category "Antiques\Incunabula". The seller is "nini5528" and is located in jerusalem, default.