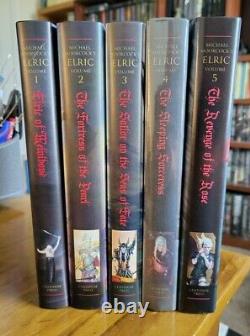 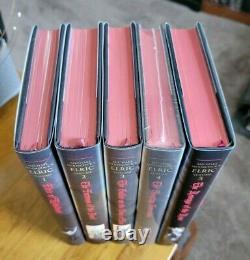 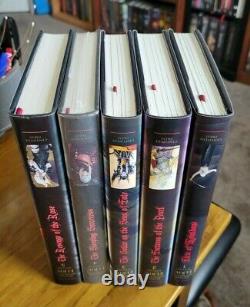 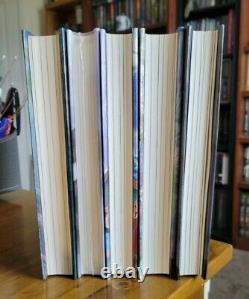 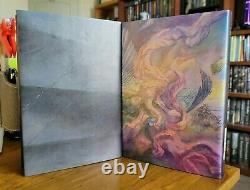 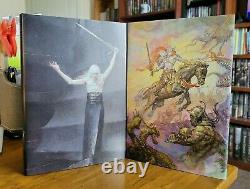 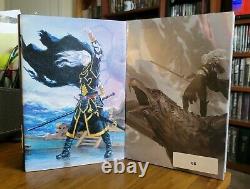 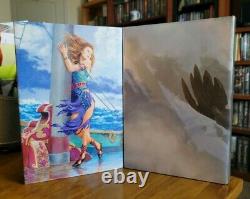 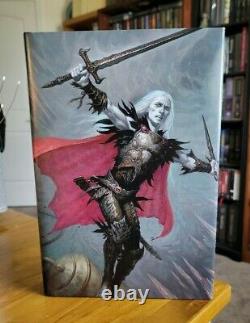 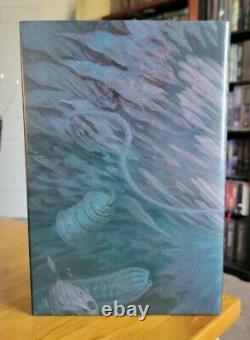 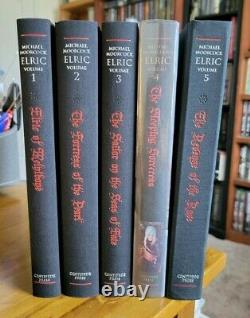 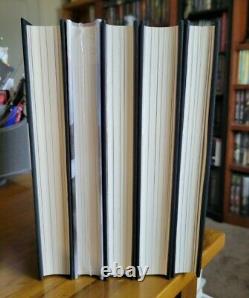 Oversize at 6½ × 9½ inches. Head and tail bands, ribbon marker. Now, for the first time, the titles, contents, and order of the Elric stories appear exactly as Michael Moorcock has long intended, making the Centipede Press editions (ultimately 9 volumes, with a tenth volume of archival artwork) the most definitive sets of these books ever made available. With gorgeous illustrations and featuring guest introductions from some of the top writers in the field. Each volume will be signed by the author, introducer and artists. Elric of Melniboné, The Fortress of the Pearl. The Sailor on the Seas of Fate. Via the add to cart button at right will secure all matching numbers for every book in the series.

Michael Moorcock wrote stories about a character that, without his soul-drinking sword, was too weak to raise himself off the couch. Readers had never seen anything quite like the albino prince before and initially werent sure what to make of him. Playing on the theme of the Ultimate Outsider, Moorcocks protagonist wasnt even human in the strictest sense.

By the time the second novella saw print the readership had made up their minds: they loved Elric! Lancer Books brought out a two-volume set of Elric stories in 1967. Gathered up the short stories.

More Elric work followed, such as. The Sleeping Sorceress, The Weird of the White Wolf. And numerous other short stories, novellas and novels. Is Moorcock now at the height of his prowess as a novelist revisiting the early history of a young Elric. The stories and novels that Moorcock wrote to fill in the blanks in the Elric saga are very obviously necessary pieces of the puzzle that had been left out. Without these revisions, it is literally impossible for the Elric of. To become the Elric of. Moorcock brings together Prince Corum Jhaelen Irsei, the Prince in the Scarlet Robe, (protagonist of six novels), Erekose, (the titular hero of The Eternal Champion and four other novels), Dorian Hawkmoon, the lead of nine volumes which incorporate the two series. The History of the Runestaff. , with his lead character Elric of Melniboné. What we do have here, is the stripped down, essential Elric, with this being the third of the Essential Elric volumes, lavishly illustrated and finally presented in the sort of fine volumes that the work has always demanded. Includes the novel of the same name and two short stories: The Singing Citdael and While the Gods Laugh.

This volume focuses mainly on Elrics opposition to the Melnibonean sorcerer, Theleb Kaarna, who on the surface does not initially appear to be a worthy opponent, however, it is Elrics own self-absorption and angst that allows Theleb Kaarna opportunities to both escape Elrics rage and to catch him in traps that by all rights he should have avoided. Moorcock deftly utilizes Elrics flaws in order to build page-turning suspense that is almost unique to the sword and sorcery genre. In much of the genre we expect the brawny (if not necessarily brainy) hero to somehow muddle along and by sheer luck as much as anything else defeat the much smarter sorcerer, usually done in by his own hubris. In the Elric saga, we are given a character as capable of wielding a powerful spell as he is adept at wielding the vampiric black blade, Stormbringer. The saga of Elric of Melniboné continues with the fifth volume of the authors preferred text and organization.

The Revenge of the Rose. This book collects the novel. And the novella The Stealer of Souls. This volume focuses mainly on dual quests: Elrics own, to locate and retrieve the soulbox of his dead father Sadric, and his efforts to assist a mysterious being known only as the Rose to achieve her long-sought-after revenge.

In this the two fierce heroes are accompanied by the intense, diminutive poet and temporal adventurer, Ernest Wheldrake stranded in time and space as far removed from his original homeland in Glorianas Albion as ever could be and by the variously psychic Family Phatt, outcasts from the ceaselessly moving cities of the Gypsy Nation in which they all find themselves. If Elric achieves his goal, then the lost soulbox claimed by two rival Chaos Lords, Mashabak and Elrics patron Arioch will free his fathers spirit to join his mothers in the fabled Forest of Souls where she awaits him. If the quest fails, then Sadrics soul will leave its prison and enter Elric, uniting the pair in enmity for all time. The terrible and tragic nature of the crime and criminal against which the Rose seeks her revenge unfolds gradually throughout the book (and so it would seem inappropriate to reveal too much here). Suffice to say that she, Elric and their disparate allies all find themselves inexorably drawn into the orbit of the thoroughly untrustworthy Prince Gaynor the Damned, whose willingness to betray friend and foe alike in the furtherance of his own corrupted ends knows no bounds.